Since Katrina, red-tailed hawks have been moving to New Orleans and calling it home, apparently in response to the increase in their prey. Rats discovered early on that sections of the city were mostly deserted and full of food (past its prime, admittedly, but the rats didn’t seem to be bothered). As the cleanup progressed, the rats relocated or were killed — leaving the hawks to look for food elsewhere.

One of them has been looking for food in our backyard.

We’d seen a hawk in our yard before but chased it off in a joint operation with the blue jays, who were very upset about having a predator so close to their nest. After that, we didn’t see it for months. Yesterday, though, it was back, hunting squirrel.

Dad ran it off first, as it was chasing a poor squirrel down the length of the fence. I looked out a bit later and wondered why none of the squirrels were eating. Then I saw the hawk sitting in the tree closest to the deck, calmly looking around like it owned the place. So I went out and scared it away. It was back within the hour, perched in the same tree. 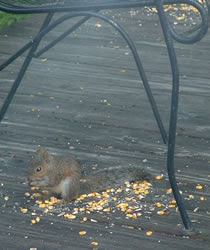 We shooed it off that time and again in the evening. Today our squirrels are eating under the safety of iron patio chairs and tables.

Don’t get me wrong; I think hawks are beautiful birds and I understand that they need to eat too. But I’d really rather they ate someplace else.

My Mom, the Stargate Fan A Pool in the Yard, You Say? Excellent…