Forbidden Island: a cooperative board game that’s a real challenge 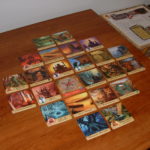 a few weeks ago, largely because it was a cooperative board game that can be played solo. I also really appreciated the price (under $20) and the beauty of the game. (The artwork on the island tiles is gorgeous and reminds me of the Myst series.)

When I first started playing, I used the novice setting, and it seemed pretty easy; in fact, I think I won nearly every time at that level. So I followed the advice in the rules and moved up to the normal setting — and I promptly stopped winning.

As it turns out, Forbidden Island is harder than it looks. Some of the difficulty is a matter of luck, depending on where certain cards fall in the deck. If the “Waters Rise” cards come up fast, you have to draw more flood cards each turn, which makes things more difficult. It’s also bad if an essential card like the landing pad gets drawn early, because then you’ve got to constantly be alert to make sure it doesn’t sink. (If it does, you lose the game.)

The characters you choose also make a difference in how challenging things get. There are six roles in the game, and you’re supposed to randomly pick characters. (I usually do, although sometimes I give in and just grab the ones I like best.) I have definite preferences — I love the messenger and the engineer in particular — but I’m starting to see the advantages of my least favorite choices too.

When I first started playing at the normal setting, I would lose about 3 out of 4 times, although I’d usually end up fairly close unless I made a dumb mistake. (See the part above about essential cards flooding. Sigh!) I think I’m getting a little better. I’m certainly trying to think ahead more and weigh each character’s options more closely; sometimes the simplest option (like shoring up a flooded tile) isn’t necessarily the most important.

Anyway… long story short, Forbidden Island is definitely worth the money and is a lot more challenging than I suspected at first glance. And I’ve just learned that there’s a sequel due out this year! Forbidden Desert is also a cooperative game, and it looks to be just as interesting as the original. I’ll let you know when I get a copy. 🙂