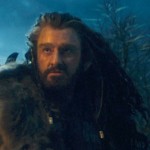 Bear with me: you’re getting a Hobbit-inspired prompt this week. (Because it’s my favorite film du jour, that’s why. And it’s not been given that exalted status just because it’s got Richard Armitage in it, although that certainly didn’t hurt.)

when Thorin suddenly realizes that he’s been a total jerk to Bilbo, who has just saved Thorin’s life. It’s lucky that Bilbo is a fairly patient soul, because Thorin’s apology starts off all wrong and sounds an awful lot like he’s chewing Bilbo out (again). In this case, things ended well — Thorin eventually made his intention clear and we all realized that he was mad at himself rather than being mad at Bilbo. But with two other characters, the encounter could have gone differently and the apology might have been cut off before it could be adequately expressed. Your challenge this week is to write a scene or story where a character is trying to express something important and doing it very badly. I’ll leave it to you to decide if the characters eventually manage to communicate or if a vital opportunity is lost forever.