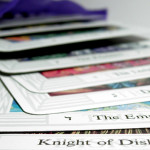 Some days, I’ll be reading a novel and I’ll think, “How did this get published? I could do SO much better.” Then I think about my novel-in-progress and how much work it’s been (and more importantly, just how much work there still is to do) and I think I’m never going to finish a novel, much less get one published. But just when I really start to despair, the Universe sends me a nudge that makes me think again.

My degree is in accounting, so I guess it’s only fitting that the Universe sends me signs via the banking system. The first time it happened was several years ago, in the days when banks still sent you a copy of your canceled checks with your statements. I opened my bank statement one month and discovered that the bank had sent me another woman’s checks — and she happened to have the same first name as my novel’s narrator. It’s not a common name, so needless to say, I felt like this occurrence wasn’t just chance or coincidence, but some higher power trying to give me encouragement (or possibly a kick in the pants).

Last year, something similar happened. I still do a good bit of accounting work to keep the wolf from the door, and I have one client who needs me to log in on his behalf to get bank statements. The bank’s website will often prompt me with security questions, so I went through the list of questions with him to get all the answers I might need. One question in particular got my attention: the middle name of his child.

I will give you one guess what that name was. (Ten points to everyone who said “your narrator’s name.”)

If I didn’t believe a certain amount in fate, I’d probably be really weirded out by these little incidents. Honestly, do you know how many women’s names are out there? It’s easily hundreds, if not thousands. I’m not an expert on statistics, but I think we’re well beyond the realm of coincidence here.

Yesterday, the sign was much more subtle, but I still think it was too coincidental to really be a coincidence. You might have seen my earlier post called The Wrong Characters, about how my writing last week went off in an unexpected direction after some inspiration in the form of sexy Scottish actor Gerard Butler. After I wrote that post, I sternly told myself that I needed to put the gorgeous Mr. Butler out of my mind and get back to the first novel, lest I embarrass myself when I have to hand it over to Nayad for her thoughts and comments. Then this morning, since I was exhausted and practically brain dead, I decided to do a mindless but occasionally necessary task: cleaning out my email SPAM folder.

I had nearly 200 SPAM messages. Lost among the ton of loan promises and pharm ads was one — ONE — with a celebrity name in the subject matter. (Again, you get a single guess on who it was. Did you guess Gerard Butler?) I almost wish I’d done a screen capture to convince myself that I wasn’t flat-out hallucinating.

But I can hear you saying, “You tweeted about that blog post and used his Twitter handle! Spambots love reading Twitter!” And my response is: the email was dated Saturday morning — roughly 36 hours before that blog post was written or published.

I’d say the Fates want me to keep writing.

As dumb as it might sound, these little nudges really do help. When I’m on the mountain with the other writers, I feel confident and everything seems possible. But when I get back to the real world, I rapidly start doubting my abilities and becoming disheartened by the enormity of my goals. I’ve read parts of my novels to the retreat writers and even had a couple of chapters critiqued, and the response from both the instructors and my peers was very positive and encouraging. But it’s hard to hold onto their words and keep the faith once I start drowning in the million mundane responsibilities that life showers on me at home.

So I’m going to keep asking the Universe to give me reassurance where it can. And maybe someday, a few of the books on my shelves will finally have my name on them.

(I’ll end with one last pitch for Nayad’s anthology Kickstarter, What Fates Impose. It closes this week, so be sure to check it out if you haven’t see it already. Thanks!)

The Wrong Characters Laugh or cry