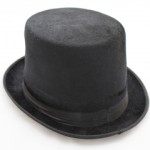 Some of my favorite fictional characters are known for wearing distinctive hats. Dirk Gently (of Dirk Gently’s Holistic Detective Agency

, by Douglas Adams) is described as wearing a dark red hat with a flat brim — “…an elegant adornment… if the wearer were a small bedside lamp, but not otherwise.” Moist von Lipwig (from Terry Pratchett’s novels Going Postal, Making Money, and the upcoming Raising Steam

) is more readily recognized by his hats than by his ordinary features — first a gold hat with wings, then a top hat covered in gold glitter. Sherlock Holmes is another hat person; his association with the deerstalker is so indelible that the BBC’s modern re-invention of the character

(portrayed expertly by Benedict Cumberbatch) uses the hat in one episode as an attempted disguise. In each case, wearing a hat conveys something about the wearer: eccentricity, flamboyancy, confidence.

Accessories and other items of personal decoration can help paint a vivid picture of a character. This week, write a scene that uses one or more physical objects to define a character.