Writing Exercise: Middle of the Road 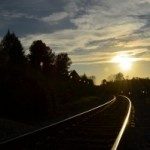 Some people (and characters) are afraid to take sides: they may not like confrontation, or they may want to keep their options open and hedge their bets rather than be caught on the losing team. (An excellent example is Corporal Nobby Nobbs in Terry Pratchett’s war satire Jingo

; during a battle, the generals would gauge which side was winning by looking to see what uniform Nobbs was wearing.)

These types of characters need a push to commit. What’s your character’s lever, the motivation that forces a choice? Write a story or scene where a character has been trying to stay in the middle of the road, and find a way to make him or her take a side.