Hacking my social media into submission 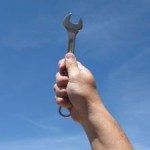 I’ve been more than a little frustrated with my social media sites lately. I’m active on Twitter, Facebook, and Tumblr, and I pop in on Pinterest once in a while, though not as much as I once did. Four sites may not sound like that many in today’s world, but it’s been enough to frustrate and overwhelm me — so much so that I was seriously considering a break from social media. But I was reluctant to do it because I work from home; my Twitter and Facebook friends are my equivalent of the co-workers you chat with on breaks during the day, and that little bit of interaction really does make a difference for me. Luckily, I discovered a couple of tricks that have really helped, so I’m not feeling like my social media interactions are out of my control anymore.

The first solution took two minutes, but it completely transformed my Twitter timeline, getting it back to a manageable level. There were a few people I followed who retweeted a lot of article links — and because I valued their opinions, I would inevitably end up either reading those articles or bookmarking them to read later. The solution? Turning off their retweets! (You can find this option by going to their page and clicking the gear icon to get the task menu.) I turned off retweets for four people and immediately my Twitter feed became quieter; the difference was so dramatic it honestly shocked me. I even feel like I could follow some new people now, though I haven’t yet — no point in rushing right back to the same state of overwhelm I had before.

I haven’t been able to find an equivalent hack for Facebook yet, but I did find a pretty nice tool called Social Fixer that I’ve started using. It’s a browser plug-in that allows you to customize some of what you see on Facebook. It allowed me to hide a lot of the clutter surrounding my feed — the menus for events, pages, and developers; all those little sections of “people you may know”, “places nearby” and “recommended pages”; and that annoying list of features that I never use (gifts, games, pokes and the rest of it). My page is so much less cluttered now! And if I do need one of those menus, it’s easy to turn off the plugin temporarily.

I didn’t realize just how much my social media experience was frustrating me until I cleaned it up. I feel like I can enjoy my sites again; using them gives me the break that I want instead of more pressure to See All The Things. If your accounts are driving you crazy, take a few minutes and do something about it before your entire experience gets ruined. Believe me, your overstimulated brain cells will thank you.

Sending out the stories Saving you from the sad