Victorian Tom in the house 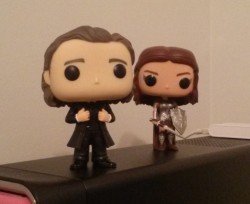 Funko POP’s take on Sir Thomas Sharpe (Tom Hiddleston’s character in Crimson Peak) has arrived to join Lady Sif, my first foray into the world of tiny adorable character figures. I had him on my shortlist of figures I might get, and when I saw that he’d been released, I ordered him in a moment of severe weakness (last week was very, very stressful and exhausting). I think he looks delightfully fretful, and since I’ve been worrying a lot lately, I figure he can worry with me, or possibly for me.

I like the companion figure of Edith Cushing too — the little candelabra is such a great accessory — but I already have one more figure on the “must buy” list (Benedict Cumberbatch as Sherlock, holding a violin) and several on the “strongly considering” list, and my budget can only cover so many little vinyl folk. I’ll have to sternly remind myself that just because I like something, that doesn’t mean I have to own it.