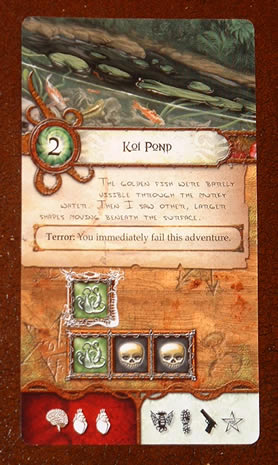 So, I was playing the board game Elder Sign last night and it was going very, very well — I had 9 of the 11 Elder Signs I needed to win and very few tokens on the Doom track after just three hours on the game clock (12 turns). I was thinking it was going to be a pretty quick game (unlike the usual 2 to 3 hours it takes me to finish) — and then I thought something like, “This is going too well — something has to go wrong.”

Truer words have never been said.

Around this time, I made a huge, huge mistake: I tried to tackle a card called The Koi Pond. It looks deceptively easy, since you only need 4 dice to beat it, and I was playing the character of Kate (the scientist), which eliminated the Terror effect (you automatically fail if you didn’t accomplish a task and you rolled a Terror). Unfortunately, it’s very hard to roll two skulls and a Terror all in one go, and without a spell to focus an extra die, I was sunk.

Then I compounded my mistake by putting another investigator (Jenny) on the card. I was thinking that having an extra person to focus a die would make a difference — but all of my other investigators were subject to the Terror effect, which ultimately did them in.

Yes, I made the hugely stupid mistake of thinking that throwing more investigators in the mix would help. Since my next investigator (Amanda) had cards to roll extra dice and had a couple of clues, I thought she could defeat it. She was close, but ultimately fell to the Terror effect — as did Sister Mary when I threw her on the pile in a last-ditch attempt to save Kate. A very bad thing about The Koi Pond is that it costs 2 stamina if you lose, and Kate only has 4 stamina total — so losing that card twice means no more Kate. (Ditto for Jenny, etc etc.) But in my bid to save Kate and her 3 Elder Signs, I ended up losing ALL FOUR investigators. So, I basically ended up back at square one, with all new investigators and no Elder Signs.

I have now learned my lesson about The Koi Pond. You do NOT try this card unless you’re playing Kate and she’s got both extra dice, a focusing spell, and six clues in her hand. (Sheesh!)

The game is still going, by the way — after 2 hours, I was too tired to keep playing, so it’s all still out on my desk. Current tally: I have 6 elder signs, while Narcolepsy (don’t ask me to remember the correct name) has 5 out of 9 Doom tokens. And 4 of my 7 location cards (6 regular, one Other World) have monsters on them. But one of those is The Damned Koi Pond, and you know I’m not going back there.

I’ll let you know who wins.

UPDATE: I won! And I still had 2 empty spots on the Doom track. Take that, Narcolepsy!