How Could You Not Feed This Face?

I’ve heard from various sources that you don’t feed raccoons. (The reasons for the advice mostly seem to revolve around the fact that raccoons can carry diseases like rabies.) We never planned on feeding them, but it happened anyway, as a side effect of feeding the squirrels; raccoons eat corn too, and they started prowling the deck at night looking for leftovers. So, although we felt sorry for them — just think how many corn kernels your average raccoon has to scrounge to get a decent meal! — we resolved to limit how much we put out each day: just enough for the squirrels and no more.

That was before we saw the baby.

One afternoon, we looked out the window and there was a mother raccoon with a cuddly little fuzzball in tow (literally, at times). It seemed fascinated by the plant life and curious about the yard in general, so that may have been its first time out of the nest. Mother Raccoon seemed nervous, both about its slow pace and about our observation from the window. When the maternal instinct got too strong, she’d haul Baby up by the scruff of the neck and physically move it where she wanted it to be. After a few minutes, she decided it was time to retreat to safety and took Baby back to the bottom of the tree where they nest. She let it crawl up about a foot on its own before she seized it and carried it into the treetops.

Needless to say, we were instantly in love with this tiny, fuzzy creature, and the no-food-for-raccoons rule fell by the wayside. We had a mother and baby to feed.

Several weeks passed without any baby sightings, and we became less vigilant about leaving out extra corn, stale bread, and other scraps. Then one afternoon, we found the deck occupied by Mama Coon and two plump, waddling furballs. 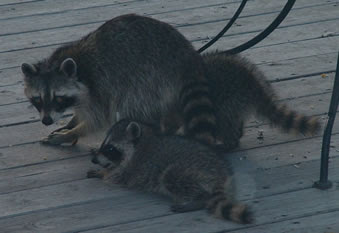 They snuffled around, inspecting everything while Mama ate. And I got pictures this time. She didn’t seem to know what to make of the camera (I think the flash made her nervous), but I got quite a few good shots before she led her brood away.

After that, we renewed our efforts to make sure that Mama and babies were adequately fed. Unfortunately, it’s hard to feed specific raccoons without attracting others, so we eventually had to give up the proactive approach and only toss out bread when we see them. They may run when we open the door, but they always come back. 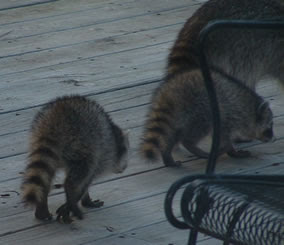 Friday with the Squirrels My Mom, the Stargate Fan