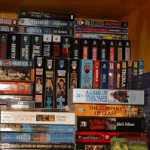 I haven’t done the Buy, Borrow, Bin game in a while, and I decided to make this one a themed episode for an added challenge. So I’m selecting three random novels by Terry Pratchett, one of my favorite authors. Let’s see which books are our contestants this time, and which one gets the chopping block!

Using a random number generator, I came up with the following three titles: #31, Monstrous Regiment

So, let’s do them in order. Monstrous Regiment, sadly, gets binned. For starters, it’s a standalone Discworld book; while there are a few cameos from Vimes, Angua, and William de Worde, among others, the vast majority of the novel follows a rag-tag group of women masquerading as men in order to join the army and fight for their country. I did enjoy the novel — the story was good and I loved some of the characters (like the vampire recruit Maladicta and their medic, Igorina) — but the idea of the all-girl regiment felt a little contrived to me, as did the ending. And while I have read it more than once, I don’t have a strong desire to read it again.

The choice of where to put the remaining two is tough. Jingo is a Watch book — my favorite kind — and it features fun cultural satire abroad in Klatch, plus some wonderful bits with Vimes’s electronic Disorganizer, which I adore. And we see Vetinari outside of the Oblong Office, which is unusual and entertaining. On the other hand, Small Gods is utterly, utterly brilliant satire, skewering religion to hilarious effect. But only one can go in each slot… so…

I’m going to pick Jingo as my Buy selection, largely on the basis that I end up re-reading it more often than Small Gods. There are a few scenes of torture in Small Gods, and while they aren’t seriously gruesome or explicit, they still bother me, and they’re the main reason I haven’t read the book in a while. So Jingo wins, and Small Gods ends up in second place with Borrow status.

Agree? Disagree? Feel free to share your thoughts in the comments!