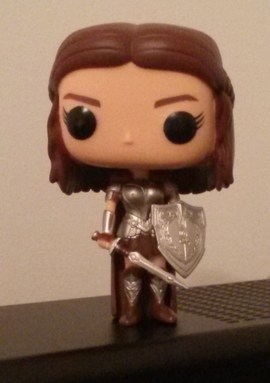 I’ve been frustrated lately by the condition of my poor Lady Sif bobblehead — specifically, the condition of her head itself. In the course of standing guard over my desk, she’s taken a tumble a few times, and it’s quite the distance from the top of the PC to the hardwood floor. Those high-speed trips earthward left her with a distinct head tilt; the spring must have bent or shifted, leaving her looking down and to the right.

A few days ago, I took a pair of needle-nosed pliers and tried to shift the spring, but that only made her condition worse. Then it finally occurred to me to do a Google search, and it turns out, there are plenty of Internet resources on the subject of repairing Funko figs. I found two different sources that suggested sticking cotton balls inside the head to force it into a better position, which sounded like a pretty easy fix to me. I ended up pushing three cotton balls in there — one at the back, one on the lower side, and one in between the two — and I pushed them down between the spring and the side of the head using a Q-tip. And it worked like a charm! My Funko Sif holds her head upright again and is back to looking like her bold, no-nonsense self. (Note: this fix does make the head less bobble-y, which some people may not like. But I thought her head was too wobbly before, so I find that side effect to be a bonus.)