Buy, Borrow or Bin, Round 2 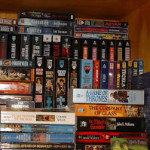 It’s time for another round of buy, borrow or bin! If you missed the first post, I pick three books at random from my Goodreads collection and relegate one to each category: I’d buy it; I’d only borrow it; or I’d chuck it in the bin. Sadly, you have to put one book in each category, but so far, my choices haven’t been too painful.

This one is harder than you might think. Feet of Clay is great, but it isn’t my favorite, while Misery Loves Cabernet is all kinds of fun. But I have to choose, so here goes…

, by Terry Pratchett. While it’s not my favorite of the Night Watch books, it has a lot going for it — particularly the fact that it introduces dwarf constable Cheery Littlebottom, a character I’ve come to love. I also enjoyed other colorful new characters and elements, such as the College of Heraldry, Wee Mad Arthur, and Nobby Nobbs’s ancestry. (The golems are interesting but were a bit depressing in this book; I like them more in later stories like Going Postal

.) The villain, Dragon King of Arms, was also very well done. So we’ll call this one a keeper.

, by Kim Gruenenfelder. Yes, more chick lit. Spare me the groans — sometimes a girl just needs a funny, feel-good book, and this one delivers. The narrator, Charlize “Charlie” Edwards, is assistant to Hollywood star Drew Stanton, a character as loveable as he is crazy. The Hollywood setting and twists combined with the character of Drew really set this book apart from the cookie-cutter novels that have littered the chick lit genre. (You just don’t forget Drew buying a hippo and then needing Charlie to get it removed from his pool.) But I’m putting it into the borrow category for two reasons: one, if you’ve read the preceding novel

, some of the scenarios with Drew will seem repetitive; and two, I’ve got to be in the right mood to read chick lit. So it’s a borrow — just as long as I can borrow it when I feel the need.

, by Sophie Kinsella. I’m sorry, Sophie; really, I am. I was a big fan of the first three Shopaholic books, and I like some of the standalone books as well. But this one was a dud. The plot felt too contrived and it just wasn’t that funny. There’s no question about it: this one goes in the bin.

I hope you enjoyed this round! Next time, I’m going to try a different randomization tool, since this one isn’t giving me great results; it’s definitely skewing towards numbers over 100. Or, who knows, I may just pick three myself with an aim for making things interesting! I’d certainly like to get a few more fantasy selections in the mix; based on the six choices so far, it looks like my library is mostly chick lit, which definitely isn’t the case.

Until next time… happy reading!

On a roll The delight that is Hiddlesfacts